Pop Connection is a series that examines the Internet of Things through the lens of pop culture. 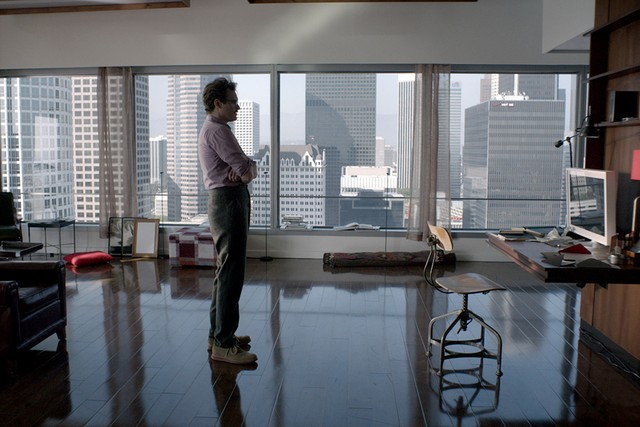 Hi, dream apartment from Her.

Have you heard of Tiny House Nation? It’s the FYI Channel’s smash hit (in FYI Channel terms) about, uh, tiny houses — which generally mean houses smaller than 500 square feet. It seems revolutionary — until we remember that city folk have been living in tiny apartments for a very long time. The constraints of the tiny apartment have been on the minds of urban dwellers since the advent of the studio apartment (and trust me, 500 square feet can seem spacious comparatively), and rather than phasing those out, we’re only seeing apartments get smaller.

Most science fiction films show us expansive, light-filled, dream apartments. The reality is probably closer to the future glimpsed in 1997’s The Fifth Element:

Poor video quality (and endorsement of smoking) aside, can we agree that this is a pretty ingenious use of space that is partially made possible by home automation? OK, we’re not quite at the point yet where all of this is possible (though I’d love it if my bed could disappear into the wall and come back to me fully made and sanitarily shrinkwrapped, as we see in a later scene) — but some of it is.

The one thing we can say is that the aesthetics for the smart apartment of the future will at least look a little more like that of Theodore Twombly in Her than that of Korben Dallas (Bruce Willis) here in The Fifth Element. To be fair, The Fifth Element came out before the popularity of UHD TVs, smartphones, or beautifully designed technology, which is why it looks a little… old fashioned, let’s say.

But it’s easy to focus on what fictional futures get wrong. What’s impressive here is how much it gets right. The Fifth Element isn’t the sleek, sterile future that we’re used to from Star Trek, but it also shows home automation as something that the average person lives with, depends on, and maybe even sees as an afterthought. Korben Dallas has quite a day ahead of him here, but at least he doesn’t have to worry about stumbling around in the dark in his windowless micro-apartment.

Having your lights come on automatically when it’s time to wake up is pretty standard stuff for SmartThings. And I’m sure you could hook some kind of dispenser up to a smart outlet and set it to dispense when the lights come on. You can always attach an Arrival Sensor to your cat’s collar to know when to let her in — though that fully-integrated futuristic kitty door still needs to be invented. Plus, we’re already ahead of Dallas’ apartment in one important way: rather than having all of the tech built into the walls, we can take our SmartThings with us to any new apartment without having to reset all of our preferences. Score one for the present.