Lightning Crashes, a Family Gets Smart About Sewage Backup

After a father and his family are hit with a sewage backup during a thunderstorm, he sets up a foolproof water-detection solution using SmartThings, and it saves him from a second flood later that week.

“My SmartThings system really saved me on Monday during some flooding we had here outside Chicago.

A week ago Saturday, I was at the Cubs game with some family and an intense thunderstorm moved in, delaying the game for some time. The game started late, and after about two innings, we got a call from my parents who were babysitting our daughter. They reported that they had noticed that water was coming in from under the toilet in our lower-level basement. It was only by luck that they had gone down there and discovered it. My father cleaned it up–filling up my 16-gallon wet vac in the process–but the whole experience left me shaken. 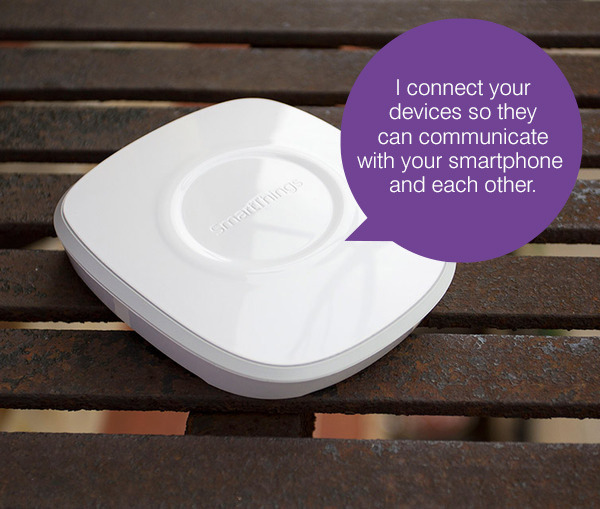 What if I had been out of town? We had never had a sewer backup in the four years we have lived here, but I knew it could happen again.  What if we had been sleeping and not discovered the water coming in until morning? Our daughter’s play area, toys, and furniture would all be ruined.

I knew about SmartThings, so I decided it was time to put some smarts into my house. I placed an order for the SmartThings Hub on Monday, June 23rd and it was up and running on the 25th. I also got a couple of SmartSense Moisture sensors as well as a SmartSense Multi sensor so that I could be notified when the mail arrives each day. I already had a Sonos Play: 1.

I was able to quickly set my system up when I received it, no problem. I actually hid the SmartSense Moisture sensor on the underside of my pop-up trash can in the bathroom. You would never know it was there due to some handy work with my Dremel drill. I used the integration with Sonos to set up a voice alert as soon as moisture was detected in my guest bathroom. I also had it send me an alert on my smartphone and, using IFTTT, call my phone as soon as excess water was detected.  I knew I had my bases covered if the flooding happened again. 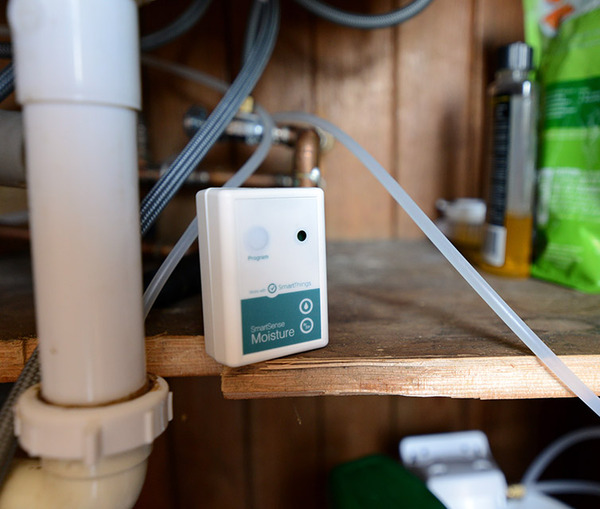 Little did I know, but the flooding I experienced when we were at the Cubs game was caused by a lighting strike at one of the pumping stations in my town. Repairs had started, but the system was not fully operational when Chicago was directly in the line of major storms that moved through the midwest on June 30th. I was upstairs in my home office working late the following Monday when a second line of storms rolled in. At around 10:40 p.m., I decided to call it a day, and as I was getting ready to head to my bedroom, my phone rang… I got a text… and shortly thereafter, I heard a voice exclaiming: ‘Moisture has been detected in the bathroom!’

I ran down there, and sure enough, water was once again backing up in the sewers and out of the toilet in the downstairs bathroom. I quickly got my wet vac and I was able to suck up the water and avert a disaster.  My 2-year-old slept through the whole thing.

My neighbors are not so lucky, and now they are interested in SmartThings as well.”

I still have some a bit more to clean up, and getting two floods in a week is frustrating, but the good news is our neighborhood has repaired the pumping station and my downstairs is not a total loss. My neighbors are not so lucky, and now they are interested in SmartThings as well. I keep thinking, had I gone to sleep and not had SmartThings set up, I would have awoken to my entire downstairs covered in sewer water, and all my daughter’s toys would have been ruined–not to mention the damage our entire house would have suffered.

I have now invested in more SmartSense Multi sensors, a garage door tilt sensor, more SmartSense Moisture sensors for near my sump pump and water heater, and Philips hue bulbs to help notify me of events.” – Adam

Did you know… that according to HomeAdvisor.com, the average cost to repair home water damage throughout the country is $2,489?

If you’d like to avoid costly and devastating water damage in your home, the easiest and most affordable way to get started is by picking up our brand-new Water Detection Kit.

Here are some other stories about how customers have used SmartThings to prevent water damage in their homes: